This tutorial shows the user How to use the Ableton Live FLANGER audio effect.

Ableton’s FLANGER is one of the stock audio effects included in Live that is capable of using two parallel time-modulated delays to create “flanging” effects that appear as a result of the comb-filtering.

This tutorial will present a step-by-step guide on how to configure and use the FLANGER audio effect in Live.

2. From the Browser, search for Audio Effects -> Flanger. 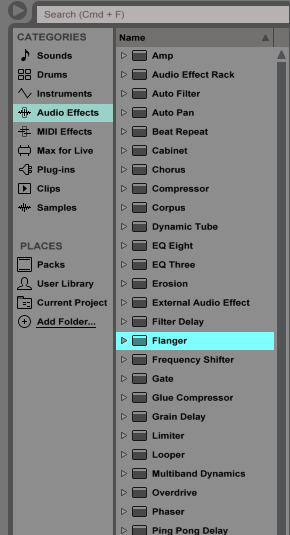 3. Drag and Drop the Flanger audio effect on top of the audio track labeled as “1 Audio”.

As soon as this effect has been dropped on top of the track, it is easy to see how the Flanger audio effect now appears on the device view of the track.

Now that we have added the effect to our audio track, we can explain each of the parameters included. The following picture shows the graphic interface of this audio effect. 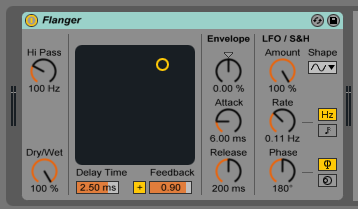 Flanger has several different parameters we can control, these are:

For the purpose of this tutorial, we will be configuring Flanger to create a soft flanging “doubler” effect to our audio track . The parameters will be set as the following:

We have now finished configuring our audio effect and it is ready to be used.

We hope you found this tutorial on How to use the Ableton Live FLANGER audio effect useful!