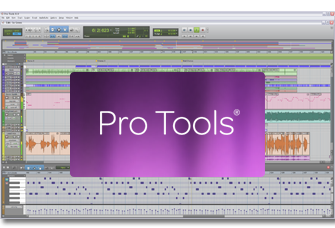 There are a number of new features in Pro Tools 10, but letâ€™s outline a bit of the major ones:

PT 10 introduces the Channel Strip, which is modeled after the Euphonix System 5 Channel strip.Â  It features a Expander, Compressor, Sidechain settings, and EQ, and the ability to change the order of these effects in realtime.

In the past, Pro Tools has created new fade files each time youâ€™ve created a new fade; this is no longer the case.Â  Fades are now interleaved with the file, and processed in real time.Â  This is very good news for those that rely on heavily fading in their production.

Avid purchased Euphonix last year, and has since integrated their control surfaces heavily into Pro Tools.Â  PT10 continues this, with over 400 PT features now Euconized (able to be controlled by the control surface).

PT10 introduces the AAX plugin format, which will allow for audio processing in the host or in native situations.Â  As Avid puts it, it will allow you to process audio in the same way you used to with Audiosutie plugins, as if they were realtime RTAS plugins.Â  Avid states that 100 audio plugin developers have developed AAX plugins so far.

For a new installation of Pro Tools, the price is $699.

Also announced wasÂ Pro Tools 10 HDÂ and the newÂ HDXÂ cards.Â  Letâ€™s go over some of the new features:

You can now stream audio directly from 64 bit addressed memory space outside of the memory space which Pro Tools uses.

This will lead to less small files, faster file handling, and faster disk handling.Â  So far, Iâ€™ve seen a 128 track PT 10 HD session, and the speed of accessing files seems to be quite fast.

The new HDX cards feature 256 voices per card, and are â€œstackableâ€, so you can load many into one system.Â  One card is said to be 4 times as powerful as any current HD system.

Avid states that a Pro Tools 10 system with an HDX card and Omni interface and Pro Tools 10 would run around $10,000.

Finally, some bits about the new software overall:

– Pro Tools 10 introduces a new file extension, .ptx, which is backwards compatible with other versions of Pro Tools, going back to version 7.Â  If you open an older Pro Tools session in PT10 with fades, they will be converted to the new fade format for less small files and faster file handling.Â  You can then delete the fades folder from your sessionâ€™s folder.

These are just some of the new features; you can read more at theÂ Avid website,Â or watch this space for video overviews and tutorials of Pro Tools 10 – weâ€™ll be showing you all the goods!