Think about how lucky we are to have a product like ReWire. Working â€˜behind the scenesâ€™ it allows us to easily stream audio, midi and control information from one software application to another. Letâ€™s dig a little further into what ReWire is and how it can help you in your studio.

Originally developed by Propellerheads Software back in 1998, it first showed up in Propellerheads ReBirth RB-338 and Steinbergâ€™s Cubase VSTâ€”allowing the two programs to seamlessly play together. Wow, how far weâ€™ve come since then! ReWire 2 is the most current version, working cross-platform on anything from MacOS9/MacOSX to X/Win98, NT, 2000 and XP.

If both applications youâ€™d like to synchronize have ReWire, you can do the following:

Fully synchronize both with transport control between them including Stop, Play, Rewind, FFW, and of course, BPMs.

Stream up to 4080 individual Midi Channels from one application to another.

Stream up to 256 individual audio channels from one application to another (only 64 with ReWire 1).

Locate any point simultaneously together.

To actually get a ReWire session to work properly, itâ€™s important to launch the audio Sequencer first (officially referred to as the mixer application). For example, to use Reason with Pro Tools, you must make sure you open Pro Tools first. Once Pro Tools is running, you THEN launch Reason (officially referred to as the Synth application). Note that you can also just open Reason as a Plug-in within the Mixer application, which will then launch it. If you donâ€™t follow these simple guidelines, they wonâ€™t run together. Iâ€™ve made this mistake many times, so just be careful. 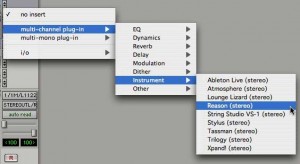 Next, you have to â€˜activateâ€™ a ReWire channel in the mixer application. So back to Pro Tools, you would create a stereo track and instantiate Reason (as mentioned above).Â  Youâ€™ll then see a ReWire dialog box open showing Reason is ReWired through Mix Lâ€”Mix R. Itâ€™s simple! 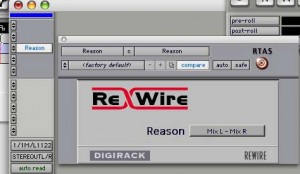 Reasonâ€™s stereo (Left and Right) output is now fed through the ReWire channel directly into Pro Tools. So you could have 16 channels of Redrum, Subtractor, Malstrom and Dr Rex running in Reason, but the audio will output as a stereo mix in Pro Tools (or whatever mixer application you run).

Once ReWired, you can also toggle between applications, and either transport control will run them both – in perfect sync. If they donâ€™t run together, make sure you turn on the â€œFocus: Playâ€ button in Reasonâ€™s transport panel.

ReWire is not limited to stereo output only, so you could actually output each of the above mentioned Reason devices individually into Pro Tools – but weâ€™ll get into that in future columns. For now, enjoy a ReWire session with your favorite software program!

As a side note, itâ€™s important to also remember that each program must be saved individually, and you have to quit Reason before quitting the Mixer application.