How to Consolidate clips in Pro Tools

How to Consolidate clips in Pro Tools

The following tutorial shows the user how to consolidate clips in Pro Tools.

Often times, prior to the mixing stage of a production, the engineer might spend time editing the audio tracks, perhaps by time-aligning or applying elastic audio procedures. Every time the user creates a slice, a new clip is created since the previous is cut in half. After an editing session, multiple clips and even multiple audio files might end up being in a single track, ultimately taxing the hard drive since it must scan for this clips or files in real time in order to play back the audio.

A solution for this common situation is to consolidate the clips into new files. If a track has been edited and compiled using several takes, it is often recommended before mixing to consolidate it. After the consolidation process has finished, a new single audio file is created that includes all the information that was present on that playlist. Having a single file per track instead of a group of clips and compiled takes, makes it easier for the hard drive to run the session since it would only need to single file per each track.

The following tutorial shows a step-by-step guide on how to consolidate clips in Pro Tools. 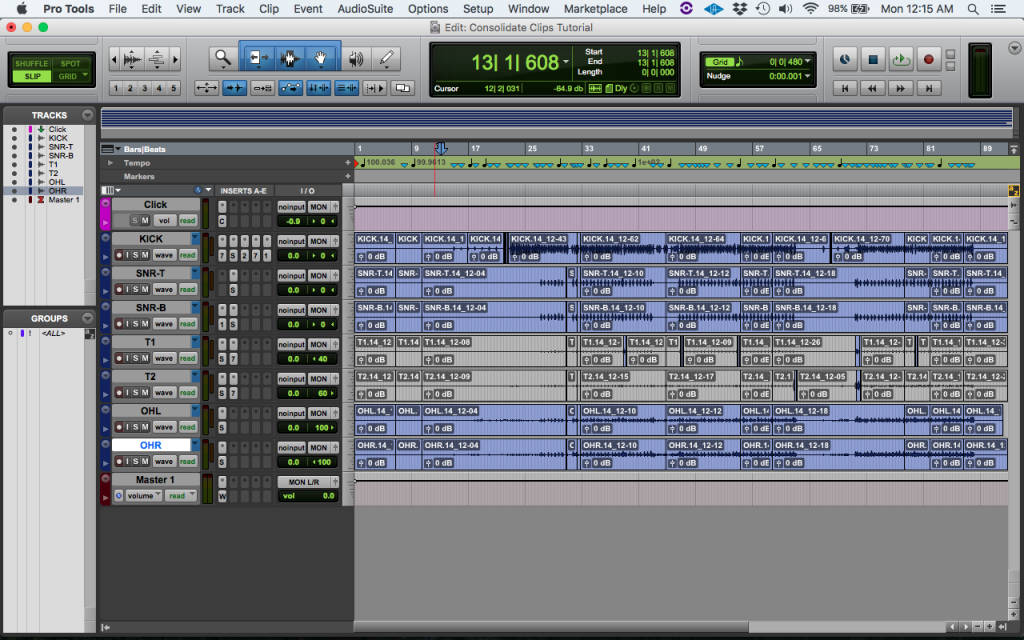 The picture above shows a Pro Tools session with several tracks.

From the previous picture we can see that this session contains several tracks. These tracks have been edited because there are several clips on each track. The editing could have happened due time-alignment or compilation of several takes. These are the tracks that will be consolidated.

2. Click and drag all the mouse to select all the clips that want to be consolidated:

Now that all the clips have been highlighted, they can be consolidated.

4. Consolidated clips will now look as:

Note how these clips do not appear as sliced but as single clips, this is because they are completely new audio files that include the previous edits and compilations applied before. The program will now read a single audio file (single clip) per track, making the playback engine run smoother.

You have now learned How to Consolidate clips in Pro Tools.

Was this tutorial on How to Consolidate clips in Pro Tools useful? If so: