Ableton’s Scale is a very useful MIDI effect that lets the user constrain or “lock” every note of a MIDI phrase from the keyboard or controller to a certain music scale or key. If the user wants to make every single key of the keyboard to only be able to play a D major scale, for example, this can be done using the Scale MIDI effect.

Ableton is capable of doing this by recognizing all the notes of the selected scale and only letting those notes be recorded into the passage. If the by some reason the user presses a key that is associated to a note that is not part of the scale, Ableton will “drag” this note to the nearest note of the scale.

This tutorial assumes the user has already created a Live Session that contains at least one MIDI track. 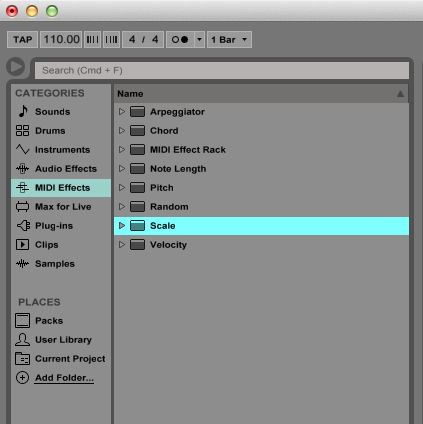 Open the Scale’s drop-down list to see all the possible Scale presets that come with Live:

This is one of the most important steps of using the Scale MIDI Effect because from the previous list the user will select the type of scale desired. Minor, Major, Dorian, Istrian, are all types of scales the user can choose and then select the base of them (C, D, E, F, etc). For the purpose of this tutorial we will be using the D major scale, so the selected preset will be “C Major”.

3. Drag the “C Major” Scale preset from the list and drop it on top of the desired MIDI track.

For the purpose of this tutorial, the desired MIDI track is labeled as “Intro Lead L”.

Once it has been dropped on top of the track, the MIDI effect will appear first at the bottom list of of the track effects as:

Zooming on the MIDI effect: 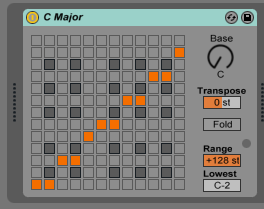 4. Change the base of the Scale from C to D:

This is the step in which we will basically transpose our Scale from C Major to D Major. This can be done by simply “twisting” the “Base” knob from the Scale plugin until it reaches “D” as: 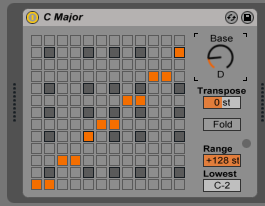 At this point we have configured the Scale plugin so that all of the notes that the user can play on this track will be “locked” to a D Major scale.

We hope you found this article on How to use the Scale MIDI Effect in Ableton Live helpful! If you want to learn Ableton Live one on one with a professional digital audio trainer, call OBEDIA ot get started!